Herman Harold Potok was born in Bronx, New York, to Benjamin Max (died 1958) and Mollie (née Friedman) Potok (died 1985), Jewish immigrants from Poland.[3] He was the oldest of four children, all of whom either became or married rabbis. His Hebrew name was Chaim Tzvi (חיים צבי). He received an Orthodox Jewish education. After reading Evelyn Waugh’s novel Brideshead Revisited as a teenager, he decided to become a writer (he often said that the novel Brideshead Revisited is what inspired his work and literature). He started writing fiction at the age of 16. At age 17 he made his first submission to the magazine The Atlantic Monthly. Although it wasn’t published, he received a note from the editor complimenting his work. He attended high school at Marsha Stern Talmudical Academy, Yeshiva University’s boys high school. 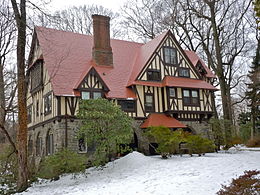 After four years of study at the Jewish Theological Seminary of America he was ordained as a Conservative rabbi. He was appointed director of LTF, Leaders Training Fellowship, a youth organization affiliated with Conservative Judaism.

After receiving a master’s degree in English literature, Potok enlisted with the U.S. Army as a chaplain. He served in South Korea from 1955 to 1957. He described his time in South Korea as a transformative experience.[4][page needed] Brought up to believe that the Jewish people were central to history and God’s plans, he experienced a region where there were almost no Jews and no anti-Semitism, yet whose religious believers prayed with the same fervor that he saw in Orthodox synagogues at home.

Upon his return to the U.S., he joined the faculty of the University of Judaism in Los Angeles. Potok met Adena Sara Mosevitzsky, a psychiatric social worker, at Camp Ramah in Ojai, California, where he served as camp director from 1957 to 1959. They were married on June 8, 1958. In 1959 he began his graduate studies at the University of Pennsylvania and was appointed scholar-in-residence at Temple Har Zion in Philadelphia. In 1963 the Potoks were instructors at Camp Ramah in Nyack. Also in 1963, he began a year in Israel, where he wrote his doctoral dissertation on Solomon Maimon and began to write a novel.

In 1964 the Potoks moved to Brooklyn, where Chaim became the managing editor of the magazine Conservative Judaism and joined the faculty of the Teachers’ Institute of the Jewish Theological Seminary. The following year, he was appointed editor-in-chief of the Jewish Publication Society in Philadelphia and later, chairman of the publication committee.[5] During this time, Potok received a doctorate in philosophy from the University of Pennsylvania. In 1970, the Potoks relocated to Jerusalem and then returned to Philadelphia in 1977.

After the publication of Old Men at Midnight, Potok was diagnosed with brain cancer. He died at his home in Merion, Pennsylvania on July 23, 2002, aged 73.

Be the first to review “Chaim Potok” Cancel reply