Public opinion in the Low Countries and worldwide 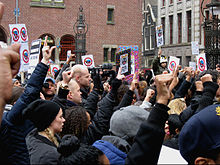 Due to the character’s depiction, which often involves actors and volunteers dressing up in blackface while wearing black wigs and large earrings, the traditions surrounding Zwarte Piet became increasingly controversial beginning in the late 20th century.[41] The public debate surrounding the figure can be described as polarized, with some protesters considering the figure to be an insult to their ancestry and supporters considering the character to be an inseparable part of their cultural heritage.[42]

Outside of the Netherlands, the character has received criticism from a wide variety of international publications and organizations.[43] In 2015, the United Nations Committee on the Elimination of Racial Discrimination wrote in a report that “the character of Black Pete is sometimes portrayed in a manner that reflects negative stereotypes of people of African descent and is experienced by many people of African descent as a vestige of slavery,” and urged the Netherlands to “actively promote the elimination” of racial stereotyping.[44] American essayist David Sedaris has written about the tradition,[45] and British comedian and activist Russell Brand has spoken negatively of it, the latter dubbing Zwarte Piet “a colonial hangover.”[46] In 2019, media personality Kim Kardashian described Zwarte Piet as “disturbing” in a tweet to her over 62 million followers on Twitter.[47]

Opposition to the figure has been strongest in the most urbanized provinces of North and South Holland, where between nine and seven per cent of the populace wants to change the appearance of Zwarte Piet. In 2012 in Amsterdam, most opposition toward the character was found among the Ghanaian, Antillean and Dutch-Surinamese communities, with 50 per cent of the Surinamese considering the figure to be discriminatory to others, whereas 27 per cent consider the figure to be discriminatory toward themselves.[48] The predominance of the Dutch black community among those who oppose the Zwarte Piet character is also visible among the main anti-Zwarte Piet movements, Zwarte Piet Niet and Zwarte Piet is Racisme which have established themselves since the 2010s. Generally, adherents of these groups consider Zwarte Piet to be part of the Dutch colonial heritage, in which black people were subservient to whites or are opposed to what they consider stereotypical black (“Black Sambo“) features of the figure including the red lips, curly hair and large golden earrings.[49]

In the early 2010s, a large majority of the overall populace in both the Netherlands and Belgium was in favor of retaining the traditional Zwarte Piet character.[50][51][52][53] Studies have shown that the perception of Zwarte Piet can differ greatly among different ethnic backgrounds, age groups and regions.[54] According to a 2013 survey, upward of 90 per cent of the Dutch public do not perceive Zwarte Piet to be a racist character or associate him with slavery and are opposed to altering the character’s appearance.[55] This correlated to a 2015 study among Dutch children aged 3 to 7 which showed that they perceive Zwarte Piet to be a fantastical clownish figure rather than a black person.[56] However, the number of Dutch people who are willing to change certain details of the character (for example his lips and hair) is reported to be growing.[42][57] By 2018, studies showed that between 80 and 88 per cent of the Dutch public did not perceive Zwarte Piet as racist, and between 41 and 54 per cent were happy with the character’s modernized “sooty” Piet style.[58][59] Others continued to make the case that Zwarte Piet is racist due to extreme undertones, among them that Zwarte Piet is a subservient slave and that the tradition enforces racial stereotypes.[60][61][62][63]

The George Floyd protests and subsequent Black Lives Matter demonstrations in the Netherlands in 2020 appear to have had a significant effect on the acceptance of Zwarte Piet’s traditional (blackface) appearance among the Dutch public. A June 2020 survey saw a drop in support for leaving the character’s appearance unaltered. 47 per cent of those surveyed supported the traditional appearance, compared to 71 per cent in a similar survey held in November 2019.[64] Prime Minister Mark Rutte stated in a parliamentary debate on 5 June 2020 that he had changed his opinion on the issue and now better understands why many people consider the character’s appearance to be racist. [65] In August 2020, Facebook updated its policies to ban depictions of blackface on its Facebook and Instagram platforms, including traditional blackface depictions of Zwarte Piet.[66] In October 2020, Google banned advertising featuring Zwarte Piet, including “soot” versions without blackface

Be the first to review “Zwarte Piet” Cancel reply